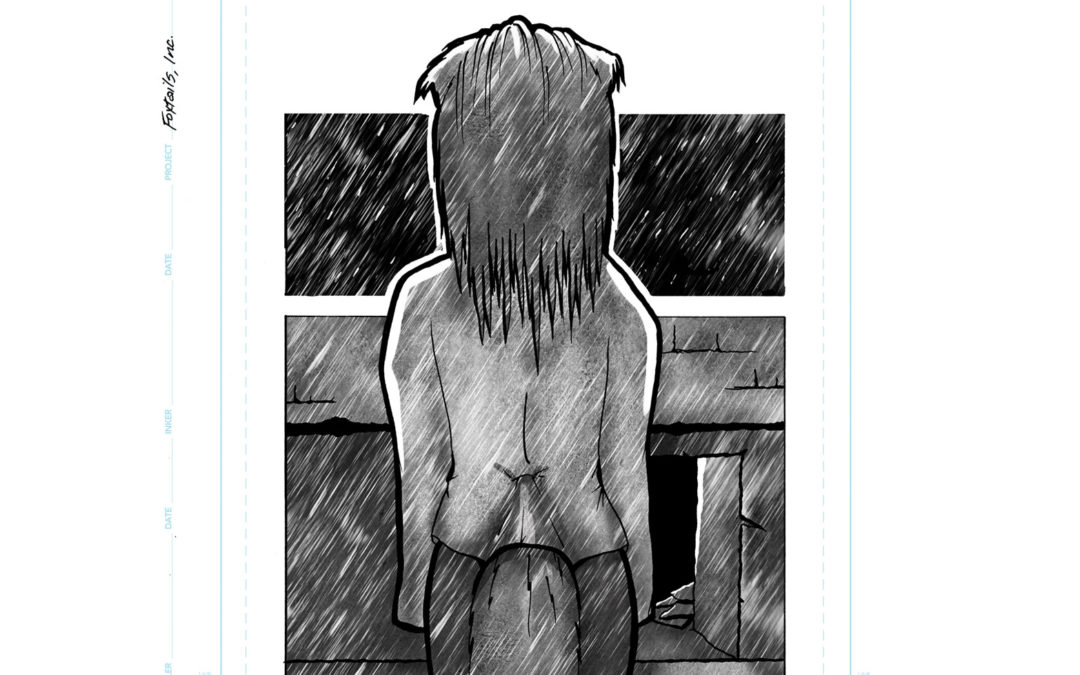 That’s Kit.  He’s from my webcomic Foxtails, Inc. In this scene, Kit’s out roaming the mountains in Japan when a thunderstorm strikes. He’s been running in the rain to find shelter from the storm. I feel like Kit there sometimes. Running. Trying to outrun the storm, but not quite getting much of anywhere. Then fate takes a swipe at you and changes everything. Soggy fox. Not necessarily a happy fox.

There are times in life where you just get totally burnt out. Tired. Needing a break. Two years ago, that was me. I needed a break. I wasn’t in the groove as it were and I needed some time to step back. A lot of “life” had been happening and it was overwhelming for quite a while. Everything after I had to leave California just kind of screeched to a halt.

I had to stop everything. I took most of my art stuff offline and could have just let that be. I hadn’t been to a convention in years. And I had virtually stopped doing anything artistic. Bad for an artist, I know, but sometimes you just have to do it. I honestly wasn’t sure if I even wanted to keep doing anything on the art side of things.

I started watching anime. Lots and LOTS of anime. I think I’ve lost count of how many sow and how many episodes I’ve watched in the last two years. I’ve abused Netflix, Hulu and FunimationNOW. Thousands of hours, I dare say at this point. It was a good low-energy solution to the burnout situation.

I kept wondering if doing my “freelance” art stuff was really worth it. It’s a frustrating thing being an artist sometimes. You never know if what you’re doing actually means anything to anyone. Nothing I do seems to interest anyone that I know, so there’s no way to see if what you’re doing is good. It’s hard to gauge if your hard work is being received. For good or bad. There aren’t really any analytics to know if your art is “worth” anything outside of hearing someone say “That’s cool” or “Boy, that really sucks!” I feel like that all the time. Granted, it’s mostly of my own doing. I don’t network very well. Despite working in marketing, I rarely ever do that for myself. And that is probably a big chunk of the problem. Getting the word out for things that you’re doing isn’t an easy thing. Especially when you’re a lazy person like me.

Conventions are a good thing to help try to get some energy again. Being able to go to WonderCon this year was great, since I hadn’t been to a convention since San Diego Comic-Con in 2016. I got to see some folks that I hadn’t seen for a while, some of which had been going through some of the same things that I had. It was a needed energy boost. It’s temporary, of course, but I have to start again somewhere.

I drew something “real” for the first time in two years while in Anaheim. The beginnings of the reboot of my webcomic, Beyond Neverwonder. I’m getting some ink for my large format printer so I can print out blank comic blueline pages so I can get some comic art going again. I need to start looking at some fundamentals training. (Hard for someone that wants to be lazy, but I know it’s the only way to make this work.) Then I need to figure out how to market me to the masses. Social media. Spreading the word about projects to groups that would be into what I do. Artist alley tables. Better networking.

I’d love to get something going again on the coloring side of things as well. I’d love to get a gig coloring someone’s book. I’d love to get my hands on the high resolution scans of the Elfquest: Dreamtime art and color that again (all the way this time, since the production timing on my original run didn’t work out). I’ve learned a thing or two since I originally colored all that back in 2000.

But, I guess that’s me getting a bit ahead of myself. That needs to be the goal, getting all these things working again, but it’s a road that I’m just now getting back on. Right now, I’m the soggy fox, staring at the broken down shrine, looking for shelter from the rain, not knowing what fortunes or dangers lie ahead. The storm is passing. It’s time to dry off and get to work.

Let’s see where the road takes me. Ja!